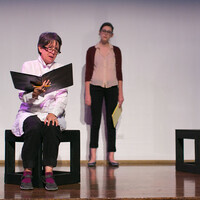 To Be Honest: Voices on Islam from an American City

The To Be Honest theater performance is a play that grew out of research conducted in the summer of 2016 led by three Trinity professors: Sarah Beth Kaufman, Habiba Noor, and William Christ. The research explored San Antonio's honest perception of Islam during the 2016 U.S. presidential election. The 70-minute production presents an emotional, intimate, and–at times–difficult look at San Antonians’ opinions about Islam and its place in American politics. They decided to deliver the research in a creative way: instead of a typical academic article, they constructed it into To Be Honest, directed by Trinity theatre professor Stacey Connelly.

To Be Honest is sponsored by the Department of Communications, Dr. GP Singh and Winkey Singh and Sikh Spirit Foundation, and the Office of Trinity University President Danny Anderson.

Discussion will follow. This event is free and open to the public.