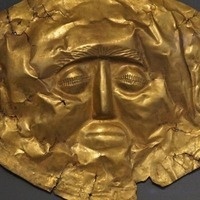 The Mycenaean Cult of the Ancestral Wanax: Hero Worship in the Late Bronze Age

The decipherment of Linear B in 1952 illuminated the Mycenaean world, but it also raised many intriguing questions. One debate in particular has centred on Linear B texts referring to offerings of perfumed oil to the wanax, or king. Were these offerings sent to the mortal king of the Mycenaean state, or were they intended for a divinity of some kind called “wanax”? How should the divine nature of the wanax specified in these texts be intepreted? Current theories (that he was a mortal, considered to be divine, or a divinity named wanax) are unsatisfactory, and claims that the oil sent to the wanax was not meant as an offering at all but rather was a secular disbursement of oil for the use of the ruling king fail to account for the wanax’s divine nature.

Through a new, insightful reading of the Linear B texts and an examination of the archaeological record Dr. Lupack argues that the wanax was certainly believed to be divine; he was an ancestral wanax who was worshipped by the Mycenaeans for the role he played in their legendary past, possibly as their founding father. This interpretation can be substantiated by the impressive archaeological material which demonstrates the respect that was paid to the burials in Grave Circle A at Mycenae and Tholos Tomb IV at Pylos by the ruling wanaktes of the Late Helladic III period – several hundred years after the initial interment of the elites who were buried in those tombs. Through her knowledge of Linear B and the archaeology of Mycenaean Greece. Dr Lupack will shine new light on the Mycenaeans and their society.