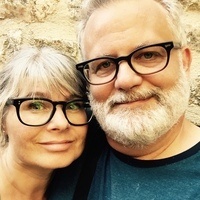 Please join us at 7:00 p.m. Sunday, April 11th for The Process and Promise of New Play Development: a conversation with Stieren Guest Artists Kristin Newbom and W. David Hancock. Playwrights Kristin Newbom and W. David Hancock, discuss the process of writing their latest work Anthropocene and experiences with new play development over the course of their careers. The talk will be presented via zoom and open to all the Trinity community. The lecture is made possible through the Jane & Arthur Stieren Arts Enrichment Series.

W. David Hancock is an internationally-produced playwright, currently based in St. Paul. His work has been seen at theatres such as Cherry Lane, the Abbey Theater, Studio Theatre, and, most notably, the Foundry Theatre, where he is the most-produced playwright in their twenty-five year run.

Hancock’s other plays include Our Lot, presented by Clubbed Thumb in 2011, and The Incubus Archives, presented by the Rude Mechanicals and Hyde Park Theatre in 2002. In addition to his Obies, Hancock has been honored with the Whiting Writers’ Award, CalArts/Alpert Award in Theatre, the Hodder Fellowship, and has been a resident at the MacDowell Colony.

Hancock’s most recent work, Cathexis, is an interactive, robot facilitated judicial event co-funded by the Creative Europe program of the European Union and a TCG Global Connections grant. Cathexis was created in collaboration with Compagnie Elapse and partners in Holland, Belgium, Serbia, and Bosnia.  Cathexis was most recently seen at Le Cube’s Centre de Création Numérique in Issy-les-Moulineaux, France.

Most recently, Hancock was the McKnight Fellow at the Playwrights Center in Minneapolis. It is his second fellowship with the Center. He lives in Minneapolis, Minnesota