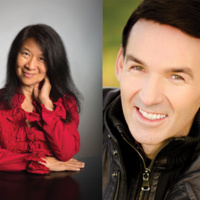 The Trinity University Music Department welcomes Stieren Guest Artists Jeremy Huw Williams, baritone, and Paula Fan, piano, for "A Century of Song." The recital celebrates 100 years of art song, with a focus on Hubert Parry and Claude Debussy, who both passed away in 1918.

Pianist Paula Fan has performed on five continents as a soloist and chamber musician, recorded more than twenty commercial albums, and has broadcast for the BBC, NPR, Radio Television China, and international stations from Bosnia to Australia. As one of the first recipients of the doctorate in collaborative piano, she has lectured on the subject worldwide. She has taught at the University of Arizona as its only Regents’ Professor from the Fine Arts, and as visiting professor at the Eastman School of Music. She was also principal keyboardist with the Tucson Symphony Orchestra for more than thirty seasons. She is the first senior fellow at the University of Arizona’s Confluencenter for Creative Inquiry and continues to tour internationally as pianist and lecturer.

The performance is free and open to the public and will be held in the Ruth Taylor Recital Hall at 7:30 p.m. on Tuesday, October 30.

The Stieren Guest Artist Series is made possible by Jane and the late Arthur Stieren of San Antonio.

Students, Faculty and Staff, Open to the Public