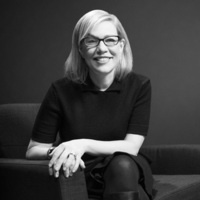 "Why We Brand, Why We Buy: An Anthropological Look at Why We Love Our Smart Phones"

Debbie Millman is an author, educator, brand strategist and host of the podcast Design Matters. Graphic Design USA named her “one of the most influential designers working today.” Debbie’s written and visual essays have appeared in publications such as The New York Times, New York Magazine, Print Magazine, Design Observer and Fast Company. She is the author of six books. Her artwork has been exhibited at the Boston Biennale, Chicago Design Museum, Anderson University, School of Visual Arts, Long Island University, The Wolfsonion Museum and the Czong Institute for Contemporary Art. Debbie has been artist-in-residence at Cranbrook University, Old Dominion University and Notre Dame University, and has conducted visual storytelling workshops at various universities. In 2009, she co-founded with Steven Heller the world’s first graduate program in branding at the School of Visual Arts in New York City. For 20 years, Debbie was the president of the design division at Sterling Brands, where she worked with more than 200 of the world’s largest brands, including the redesign of Burger King and merchandising for Star Wars. Currently, Debbie is the Editorial and Creative Director of Print Magazine, the oldest magazine about design in the United States.