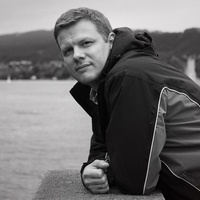 Ešenvalds is one of the most sought-after composers working today, with a busy commission schedule and performances of his music heard on every continent. After study at the Latvian Baptist Theological Seminary and the Latvian Academy of Music, he was a member of the State Choir Latvija. In 2011 he was awarded the two-year position of Fellow Commoner in Creative Arts at Trinity College, University of Cambridge. Ēriks has won multiple awards for his work and undertakes many international residencies working on his music and lecturing.

Recent premieres include Lakes Awake at Dawn for the Boston Symphony Orchestra and City of Birmingham Symphony Orchestra, Whispers on the Prairie Wind for Utah Symphony and the Salt Lake Vocal Artists, St Luke Passion for the Latvian Radio Choir and Sinfonietta Riga, the major multimedia symphony Nordic Light in the US, Canada, and Germany, as well as commissions from the BBC Proms, Gewandhaus Leipzig, and Grant Park Music Festival, Chicago. His full-scale opera The Immured was premiered at the Latvian National Opera in 2016 to great acclaim. 2018 saw the premiere of his second major multimedia symphony based on volcanoes.

His compositions appear on recordings from Trinity College Choir, Cambridge and Polyphony with Britten Sinfonia on Hyperion, Portland State Chamber Choir on Naxos, Latvian Radio Choir and Sinfonietta Riga on Ondine, ORA on Harmonia Mundi, and VOCES8 on Decca Classics, amongst others.