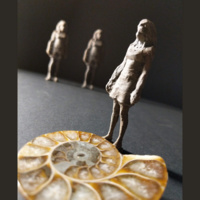 We enter a gallery space currently exhibiting a retrospective titled “Silent Retreat,” which showcases the life work of an artist named Keek who is known for her elaborate performance installations. The retrospective is divided up into three media rooms (Geophony, Biophony, and Anthropophony), each featuring various object installations and a performer playing Keek at a different stage of life. In Geophony, we encounter a Late Keek who offers us her 2014 keynote address from a Vegas conference in which she tried to sum up her artistic oeuvre with some trepidation. In Biophony, we encounter a Middle Keek who sits inside a replicated stone cabin from a place called Serenity Ranch, a silent retreat she attended for individuals contemplating suicide. Keek was struck with a new zest for life there in a crazy turn of events which she relays to us. Finally, in Anthropophony we encounter an Early Keek who speaks to us from the middle of her childhood backyard, surrounded by holes from which she has dug up items she buried there, each pertaining to a different childhood memory. Traversing the three rooms, we piece together a life of an individual who has been deeply wounded and shaped by various familial and sexual traumas, all while refusing to shy away from the collective human trauma of impending climate disaster and human extinction. Yet, through her art, Keek has given us space to stare it all down together.

W. David Hancock is a neurodivergent writer whose theatrical work has radically challenged formal and narrative dramatic conventions. His genre-bending plays, often mixing visual arts, site-specific installations, and solo performance, collapse the distinction between artifice and reality. As the critic, Elinor Fuchs writes, in Hancock’s work, “…we encounter mystery and authenticity at another level entirely.”

A two-time OBIE Award-winning playwright, Hancock’s work has been produced by numerous theatres in the US and internationally, including The Empty Space, Clubbed Thumb, Rude Mechs, The Abbey (Dublin), and, most notably, the Foundry Theatre, where he is the most-produced playwright in their twenty-five-year run. His plays with the Foundry Theatre have included The Convention of Cartography (1994), Deviant Craft (1995), The Race of the Ark Tattoo (1998), and Master (2017), which was a NY Times Critics’ Pick and received a NY Drama Desk nomination for “unique theatrical experience.”

Hancock’s stories have appeared in many journals, including The Massachusetts Review, Hunger Mountain Review, Chicago Quarterly Review, and Misery Tourism. Among his honors are a Whiting Writers Award, the CalArts/Alpert Award in Theatre, and the Hodder Fellowship.

Hancock’s most recent work, Cathexis, is an interactive, robot facilitated judicial event created in collaboration with Compagnie Elapse and partners in Holland, Belgium, Serbia, and Bosnia and co-funded by the Creative Europe program of the European Union and a TCG Global Connections grant. As a Stieren Guest Artist, Hancock is currently developing Silent Retreat with playwright Kristin Newbom at Trinity University in San Antonio, Texas.