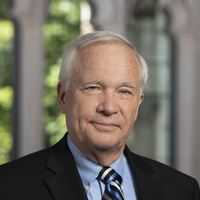 Racism as Sin: Confessions of a Southern Church Leader
What do we do with our complicated histories? Of our institutions? Of our churches? Of ourselves? We can defend it, we can excuse it, or we can confess it. Part of what it means to be Christian is to learn how to confess, understanding that the Christian faith has the resources for being able to tell the truths that America has found hard to do.

William H. Willimon, S.T.D., national known figure to speak at Parker Chapel. Willimon is the author of 70 books. More than a million copies of his books have been sold. His articles have appeared in publications including Theology Today, Interpretation, Liturgy, and Christianity Today. He is editor-at-large for The Christian Century.