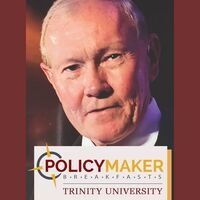 Gen. Martin Dempsey will speak on “America’s Role in the World Today: A Look at Globalization, the Diffusion of Technology, the Changing of Nature of Power, New Political Leadership, and Global Demographic Shifts.”

Dempsey recently retired from the U.S. Army after 41 years of service, which included service in Operation Desert Storm and Operation Iraqi Freedom, accumulating 42 months in combat. During his time in military service he served as the Chief of Staff of the U.S. Army and then as the chairman of the Joint Chiefs of Staff, during which time he was the senior officer in the U.S. Armed Forces and the military advisor to former President Barack Obama.

In 2015, Dempsey was named one of the 100 most influential leaders in the world by TIME Magazine. In March of 2019, he was inducted into the Irish-American Hall of Fame, and in May he received the Ellis Island Medal of Honor. On October 17, 2016, Queen Elizabeth II made Dempsey an Honorary Knight of the British Empire. Dempsey is the chairman of USA Basketball and will lead USA basketball through the 2020 Olympics in Tokyo.