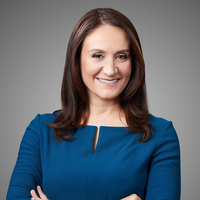 Michelle Caruso-Cabrera, one of the first Hispanic female journalists on network news, will discuss “The Intersection of Economics, Policy, and Politics.” Caruso-Cabrera was also one of the first women in the field of economics and finance reporting. She began her career as a producer at Univision and later gravitated to a role at CNBC at a time when the industry was dominated by men.

In her 20 years at the network, Caruso-Cabrera has established herself as an authority in her field. She has reported from Iraq, Iran, Ukraine, Venezuela, and other world hotspots with a front-row seat to emerging geopolitical flashpoints, such as the Russia Ukraine conflict, and the ISIS invasion of Iraq. Her expertise, however, resides at the intersection of economics, policy, and politics where she can dissect major world events and translate the impact on global markets.

In 2018, Caruso-Cabrera left her full-time post at CNBC and joined the board of The Beneficient Company, a financial services firm to pursue her interest in corporate governance and help companies shape their messaging. She remains a contributor to CNBC.