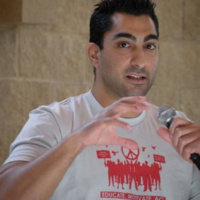 Poetry and Politics: An Evening With Remi Kanazi

Remi Kanazi is a poet, writer, and organizer based in New York City. He is the author of the new released collection of poetry Before the Next Bomb Drops: Rising Up from Brooklyn to Palestine. He is also the author of Poetic Injustice: Writings on Resistance and Palestine (RoR Publishing, 2011) and the editor
of Poets For Palestine (Al Jisser Group, 2008).

His political commentary has been featured by news outlets throughout the world including the New York Times, Salon, Al Jazeera English, and BBC Radio. He has appeared in the Palestine Festival of Literature as well as Poetry International. He is a Lannan Residency Fellow and is on the advisory committee
for the Palestinian Campaign for the Academic and Cultural Boycott of Israel.

Kanazi has taught poetry workshops from Oklahoma to the West Bank, given talks from New York City to London, and has performed at hundreds of venues, fromNew Orleans to Amman.

Students, Faculty and Staff, Open to the Public