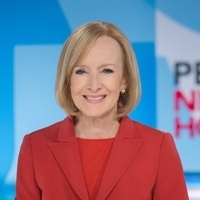 Judy Woodruff's presentation draws from major national and international stories and provides an inside perspective of the politics in play. With years of experience as a broadcast political journalist, she gives her take on reporting and interacting with the Washington political scene.

Broadcast journalist Judy Woodruff is the anchor and managing editor of the PBS NewsHour. She has covered politics and other news for more than three decades at CNN, NBC, and PBS.

When Woodruff and the late Gwen Ifill were announced as co-anchors of the PBS NewsHour in 2013, it marked the first time that an American network broadcast would be co- anchored by two women.

Woodruff has served as anchor and senior correspondent for CNN, where her duties included anchoring the weekday program, Inside Politics, and as the chief Washington correspondent for The MacNeil/Lehrer NewsHour at PBS. She also anchored PBS' award-winning weekly documentary series, Frontline with Judy Woodruff, and a monthly program for Bloomberg Television, Conversations with Judy Woodruff.

From 1977 to 1982, Woodruff was the NBC news White House correspondent. Following that, she served as NBC's Today show chief Washington correspondent.

Woodruff has been a visiting professor at Duke University's Terry Sanford Institute of Public Policy and a visiting fellow at Harvard University's Joan Shorenstein Center on the Press, Politics and Public Policy. She is a founding co-chair of the International Women's Media Foundation, an organization dedicated to promoting and encouraging women in communication industries worldwide.

She lives in Washington, DC, with her husband, journalist Al Hunt, and their three children.

The Maverick Lecture is dedicated to the memory of Maury Maverick, Jr., a San Antonio native. A Texas icon, Maury was a Marine, legislator, civil rights lawyer, and journalist. The free, public annual lectures are underwritten by the William and Salomé Scanlan Foundation, in partnership with Trinity University. The series focuses on the issues Maury Maverick considered important to our Republic.