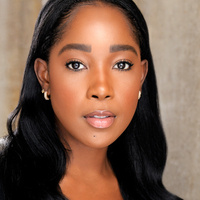 Ashley Blaine Featherson is an actress, singer, and producer who currently stars in the critically acclaimed Netflix Original Series, Dear White People. A force of talent on screen, Featherson brings that same level of passion and energy to her off-screen messages of empowerment, hard work, and self-discovery, and acceptance.

Though she notes that positivity does not come easily, especially as a Black actress, Featherson's positivity is infectious and is felt in every interaction with her. She attributes her confident outlook on life due to divine alignment with her purpose: Changing the world through her artistry and serving as a resource for women of color.

After Dear White People debuted in 2017, Variety described Featherson as "pitch-perfect," and TV Guide said the actress "is the comic force of the show." In Volumes 2 and 3, Featherson continued to steal scenes and reviews. With her stunning cover of Erykah Badu's classic, "Tyrone," she is also the only cast member featured on the soundtrack.

Recognizing a lack of mirrors for girls of color, Ashley co-created the groundbreaking web series Hello Cupid alongside Emmy-winner Lena Waithe. Vulture selected Hello Cupid as one of the best web series of 2014 and The Boston Globe went further, declaring the series, and Ashley, deserving of Emmys.

In 2019, Featherson again stood out and was hailed for her starring role in the Macro produced series, Leimert Park, at Sundance. She also starred in Amber Tamblyn's directorial debut, Paint It Black, the 2016 ABC pilot, Drew, and guest-starred in Fox's Glee.

Featherson received her BFA in musical theater from Howard University, and she currently resides in Los Angeles, CA.

Featherson will be speaking about how she views her work as an advocate while sharing personal stories about the challenges she's had to face, and the role of intersectionality and allyship in affecting DEI change.

The 2021 MLK Jr. Commemorative Lecture is cosponsored by Trinity University and the City of San Antonio MLK Jr. Commission.

This event is part of the Martin Luther King, Jr. Commission's Dream Week. A full calendar of these events can be found here.