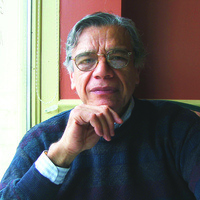 Texas-born poet Tino Villanueva discovered the power of language through the poetry of Ruben Darío and José Martí during his military service in the Panama Canal.  He subsequently expanded his knowledge and appreciation of both English and Spanish language poetry in his university studies at Texas State University and the State University of New York, Buffalo.  Written masterfully in both Spanish and English, his first published collection of poetry, Hay otra voz (1972), draws on both poetic traditions.  In Hay otra voz and his subsequent poetry collections, Shaking off the Dark (1984), Crónica de mis peores años (1987), and in Primera causa (1999), Villanueva gave voice to the world, the life experience, and the cultural expression of his Tejano community .  In doing so he established himself as one of the outstanding poets to emerge out of the Chicano Movement of the 1960’s and 1970’s.  His book-length poem, Scenes from the Movie GIANT, which was awarded the 1994 American Book award for poetry, established him in the first ranks of American poets.  The poetic range of Tino Villanueva’s uncollected poems, published in multiple journals, is extraordinary as is his mastery of poetic forms.  His most recent poetry collection, Thus Spoke Penelope, which moves him into the Homeric world,  reveals an exquisite poetic sensitivity and an exceptional fund of knowledge.

In addition to writing poetry Tino Villanueva is the editor and author of a pioneering anthology and study:  Chicanos: Antología histórica y literaria (1980), the author of a  study of three major Spanish poets, Tres poetas de posguerra: Celaya, González, y Caballero Bonaldi, and the founder of Imagine Publishers and the founding editor of Imagine: International Chicano Poetry Journal.  His alma mater, Texas State University, has honored him with both a Distinguished Alumnus Award (1995) and a Distinguished Alumni Achievement Award (2015).