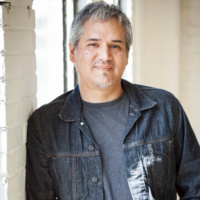 Trinity University presents the Latinx Heritage Month Series. In the first event of the series, Jim Mendiola, independent filmmaker, programmer, and writer, will screen the film Making Viva Max: A Personal History of the Alamo. The film is Mendiola's personal history of the Alamo told through the story of the making of the infamous 1969 movie, Viva Max, about a Mexican general taking over the "sacred shrine." This event is a sneak preview of the film, which is slated for national public television broadcast in 2018.

Jim Mendiola is an independent filmmaker, programmer, and writer based in his hometown of San Antonio, Texas. A Rockefeller Intercultural Media Fellow, Mendiola's award winning films have screened in numerous film festivals, museums, and colleges in the U.S., Mexico and Europe, and TV. His projects have been supported by the Independent Television Service, Film Independent, Latino Public Broadcasting, PBS, and the Sundance Filmmakers Lab, among others. As a programmer, Mendiola created the film program at Yerba Buena Center for the Arts in San Francisco, and he is currently director of the San Antonio CineFestival. Along with filmmaker Cruz Angeles, Mendiola co-created the Latino Screenwriting Lab, an annual ongoing workshop produced in partnership with Sundance. He is a currently artist-in-residence at the University of Texas at Austin where he is writing a book and creating a digital archive on the history of U.S. Chicano/Latino independent filmmaking. He is on the board of the National Association of Latino Independent Producers.

The Latinx Heritage Month series is made possible by Norma E. Cantú, the Norine R. and T. Frank Murchison Professor of the Humanities at Trinity University; the MAS Program; the Department of Modern Languages and Literatures; and Women and Gender Studies.

Students, Faculty and Staff, Open to the Public, Alumni