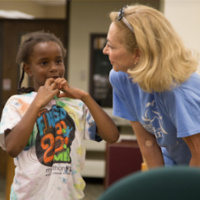 Girls on the Run Bexar County and 261 Fearless Club Texas Hill Country will host “San Antonio Game Changers,” a panel discussion and reception focused on Inspiring Girls and Women to Become Fearless through sport and running, on Thursday, Nov. 29 at Trinity University. The event will feature women’s running activist and author, Kathrine Switzer, the first woman to officially enter and run the Boston Marathon. All proceeds will benefit both nonprofits.

In 2015, Switzer established 261 Fearless, Inc., a global nonprofit dedicated to empowering women runners and walkers of all abilities. 261 is the bib number Switzer wore in the Boston Marathon. She will officially launch the San Antonio-area chapter, 261 Fearless Club Texas Hill Country, during the San Antonio Rock ’n’ Roll Marathon in December.

Girls on the Run is a national physical activity-based positive youth development program for 3rd-8th grade girls. The organization incorporates running as a vehicle to guide girls to improve their confidence, develop strength of character, create positive connections with peers and adults and make meaningful contributions to the community. The ten-week program concludes with a celebratory 5k event. Girls on the Run of Bexar County will hold its fall 5K Saturday, Dec. 8 at Comanche County Park. Girls on the Run has served over 1.2 million girls since its inception in 1996. Girls on the Run of Bexar County was established in 2010 and served 750 girls across Bexar, Comal, and Kendall Counties during the 2017-2018 school year.