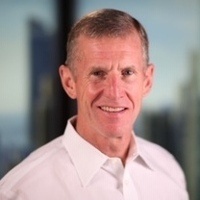 Few people have as much insight on the current state of national and global affairs as General McChrystal. In this insightful presentation, he examines today’s most pressing questions regarding the dynamic geopolitical environment. He investigates and analyzes the trends, relationships, and forces that shape the world. He details the implications that these factors will have on the security, politics, energy, and the global population.

A one-of-a-kind commander with a remarkable record of achievement, General Stan McChrystal is widely praised for creating a revolution in warfare that fused intelligence and operations. He is also known for developing and implementing the counter-insurgency strategy in Afghanistan and for creating a comprehensive counter-terrorism organization that revolutionized the way military agencies interact and operate. A four-star general, he is the former commander of U.S. and international forces in Afghanistan and the former leader of Joint Special Operations Command (JSOC), which oversees the military’s most sensitive forces. His leadership of JSOC is credited with the 2003 capture of Saddam Hussein and the 2006 location and killing of Abu Musab al-Zarqawi, the leader of al-Qaeda in Iraq. He is also the author of the best-selling leadership books, My Share of the Task: A Memoir  and Team of Teams: New Rules of Engagement for a Complex World. Exclusively represented by Leading Authorities speakers bureau, McChrystal, a former Green Beret, is known for his candor, innovative leadership, and going the distance. Called “one of America’s greatest warriors” by Secretary of Defense Robert Gates, few can speak about leadership, teamwork, and international affairs with as much insight.