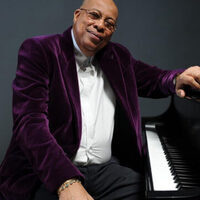 Born in a family of musicians in Quivicán, Havana province, Cuba, on October 9, 1941, Dionisio Jesús "Chucho" Valdés Rodríguez, has distilled elements of the Afro-Cuban music tradition, jazz, classical music, rock and more, into an organic, personal style that has both, a distinct style and substance.

His first teacher was his father, the great pianist, composer and bandleader Ramón “Bebo” Valdés. By the age of three, Chucho was already playing the melodies he heard on the radio at the piano, using both hands and in any key. He began taking lessons on piano, theory and solfege at the age of five and continued his formal musical education at the Conservatorio Municipal de Música de la Habana, from which he graduated at 14. A year later, he formed his first jazz trio and in 1959 he debuted with the orchestra Sabor de Cuba, directed by his father. Sabor de Cuba is considered one of the great orchestras in modern Cuban music history.
As it turns out, Chucho is perhaps best known as the founder, pianist and main composer and arranger of yet another landmark ensemble in Cuban music: Irakere (1973-2005).

Not well known outside Cuba, Irakere was discovered by Dizzy Gillespie, who was visiting Havana on a jazz cruise, in 1977. The following year, producer Bruce Lundvall, then president of CBS, went to Cuba on Dizzy´s advice, heard the band live and signed it on the spot.

The same year Irakere debuted, unannounced, as “surprise guests,” at Carnegie Hall as part of the Newport Jazz Festival. Selections from that performance were later included in Irakere (CBS), the band’s debut recording in the United States. The album won a Grammy as Best Latin Recording in 1979. That original band featured future global jazz stars such as Paquito D’Rivera and Arturo Sandoval, but over its rich, long life, Irakere became a rolling university of Afro-Cuban music while also featuring influential musicians such as the late Miguel “Angá” Díaz; Jose Luis Cortés (who would later found NG La Banda) and Germán Velazco.
Chucho stayed with Irakere until 2005.

Through the many changes the band experienced over the years, he remained the one, essential constant. But Irakere’s success had its personal costs, as Chucho’s talent as a pianist was largely obscured by his responsibilities as a leader.

In 1998 — having won his second Grammy the previous year for Habana (Verve), this time as a member of trumpeter Roy Hargrove’s group Crisol — Chucho launched a parallel career as a solo player and small-group leader.

Since, Chucho also won Grammys for Juntos Para Siempre (Calle 54, 2007), the duet recording with his father, Bebo; and for Chucho’s Steps (Comanche, 2010), which introduced his new group, the Afro-Cuban Messengers.