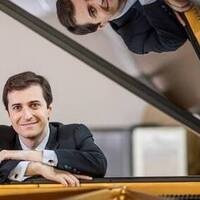 ARTS San Antonio presents the Van Cliburn International Piano Competition 2017 Silver Medalist, Kenny Broberg, in concert. The performance will be held in the Ruth Taylor Recital Hall at 7:30 p.m. on Friday, January 25, 2019. Tickets and information can be found at www.artssa.org or by calling (210) 226-2891.

A native of Minneapolis, 23-year-old pianist Kenny Broberg won the silver medal at the Fifteenth Van Cliburn International Piano Competition for performances that showed “an imaginative shaping of themes, revelation of inner voices, and an unfailing sense of momentum” (Texas Classical Review).

His 2017–2018 debut season as Cliburn medalist will include a recital tour in Hawaii, a return to his alma mater, the University of Houston, for its annual Texas Music Festival, and orchestra and recital engagements in Denver, New Orleans, West Palm Beach, and other cities across the United States. In Europe, Mr. Broberg appears with the Rye Arts Festival and Hastings Philharmonic in the United Kingdom, and in recital in Italy. His debut solo album was released by Decca Gold in August 2017, as part of his Competition prizes.