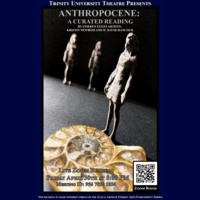 Anthropocene, a curated reading of a new play written by Stieren Guest Artists Kristin Newbom and W. David Hancock, directed by Rachel Joseph, and performed by Trinity students. The reading is made possible through the Jane & Arthur Stieren Arts Enrichment Series.

Anthropocene will have a virtually staged reading of excerpts of the play on Friday, April 30 at 8 p.m.

The Trinity Theatre program is excited to present the world premiere of Anthropocene, a new play by Stieren Guest Artists Kristin Newbom and W. David Hancock. Keek’s life is in shambles. No matter how hard she tries, she just can’t seem to get it together. Her therapist tells her about a camp where she can decide whether to live or die. The camp is run by a secret sect connected to the ancient Greeks, called “The Ushers.” The program is near San Antonio, way out in Hill Country. Part of the location’s allure is that it is believed to be a pocket of past geological mass extinction. Lore has it that a chunk of the meteor that hit the Earth during the dinosaur age (and created the Gulf of Mexico) bounced off and landed in the San Antonio Hill area, causing deep wells and magical rifts in time. Keek begins her journey and quickly realizes that her life had been falling apart even before she began to feel ill. She thought she was an artist, but she hadn’t made art in years. What was her purpose in this life? Did she even have one? Through a series of astral projections and memory travel hosted by ghost guides, Keek re-experiences childhood traumas and traces the damaging reverberations of them throughout her life. Will visions of her potential future enable her to battle the monster of her past? Can Keek find the courage to move beyond her individual fragility in order to act collectively in the face of a bigger planetary existential threat, the "Age of Man?"

Welcome to the ANTHROPOCENE!