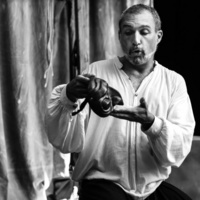 Andrea Cavarra, a commedia dell’arte specialist, has studied intensively with master teachers the centuries-old art of Italian comedy, a unique theatrical style that grew out of the folk arts of mask-making, clowning, acrobatics, puppetry, and improvisation into a beloved art form whose influence on theatrical art is incalculable. Since 2013, Cavarra has taught mask-making and commedia dell’arte in the Accademia dell’Arte in Arezzo, Italy. He also works as a comedian, stage designer, mask-maker, and producer for the international company Bämsemble, directed by Jon Kellam. He is currently the president of Zorba Officine Creative, a popular theatre and theatre-maker association, and additionally serves as artistic director of Atelier del Teatro e delle Arti, one of the biggest theatre studios in Milan, Italy.