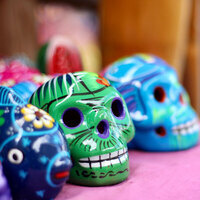 Join us for a reading by Reyna Grande. She will be reading from her newest endeavor. Reyna Grande is the author of the bestselling memoir, The Distance Between Us, (Atria, 2012) where she writes about her life before and after illegally immigrating from Mexico to the United States. The much-anticipated sequel, A Dream Called Home (Atria), was released in 2018. Her other works include the novels, Across a Hundred Mountains, (Atria, 2006) and Dancing with Butterflies (Washington Square Press, 2009) which were published to critical acclaim. The Distance Between Us is also available as a young readers edition from Simon & Schuster’s Children’s Division–Aladdin. Her books have been adopted as the common read selection by schools, colleges and cities across the country. Reyna has received an American Book Award, the El Premio Aztlán Literary Award, and the International Latino Book Award. In 2012, she was a finalist for the prestigious National Book Critics Circle Awards, and in 2015 she was honored with a Luis Leal Award for Distinction in Chicano/Latino Literature. The young reader’s version of The Distance Between Us received a 2017 Honor Book Award for the Américas Award for Children’s and Young Adult Literature and a 2016 Eureka! Honor Awards from the California Reading Association, and an International Literacy Association Children’s Book Award 2017. Reyna Grande holds a B.A. in literature from UC, Santa Cruz and an M.F.A. in creative writing from Antioch University. She is a full-time author and travels across the country and abroad, giving keynote speeches and readings about her work at schools, conferences, and festivals. She has taught creative writing workshops at writing conferences such as Voices of Our Nation's Arts (VONA), the Macondo Writers Workshop, the Bread Loaf Writers Conference, among others.

Reyna Grande will be signing books after the reading.

Event is open to the public.