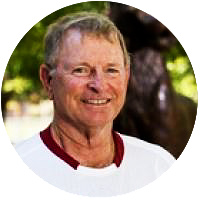 Join Coach Newman in a conversation about the history of Trinity Tennis and his roles as a:

• Member of the Texas Tennis Hall of Fame

Coach Newman assumed his new role as director of the tennis programs in July 2009 after a long and distinguished coaching career. His responsibilities include developing on-campus tennis facilities,recruiting academically qualified and athletically talented student-athletes, and building strong relationships with former tennis student-athletes from both the NCAA Division I and Division III eras.